Optimizes your strength and endurance, helps you recover faster, while helping to avoid injury and treating pain.
Designed for athletes who workout every day, SP 8.0 is the class-leader in terms of electrostimulation.
Connectable and modular, SP 8.0 includes the brand new mi-Autorange feature that continually brings you better results. 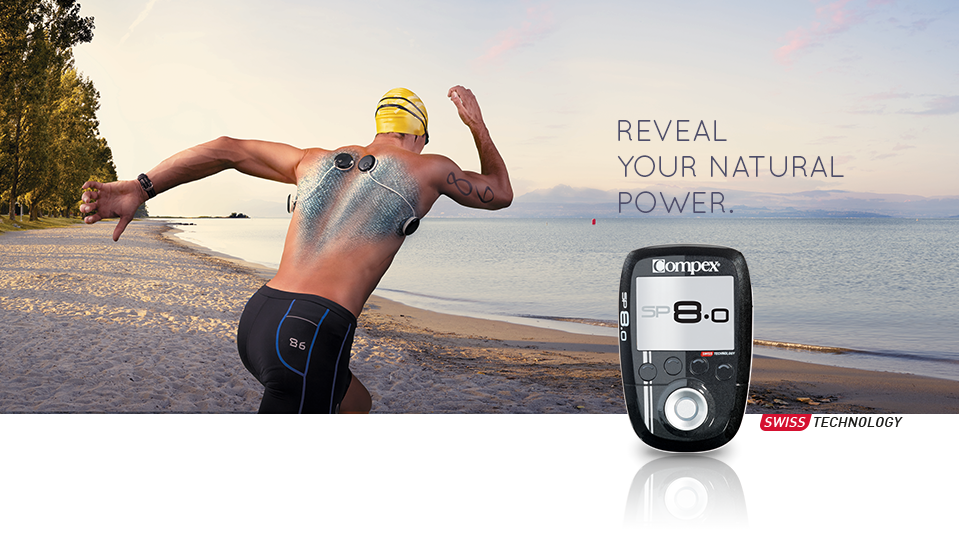 Fitness
Firm your arms . Tone your thighs . Get a 6-pack . Get stronger biceps . Build your shoulders . Build your pecs . Firm your stomach . Shape you buttocks . Body power . Lymphatic drainage.

The size of the electrodes (large or small) and the way they are placed on the group of muscles that you wish to stimulate, are crucial factors in how comfortable, and therefore how effective, the workout will be.

It is therefore recommended that you always dedicate particular care to this and that you comply with the suggested placements.

To view the different ways of placing the electrodes, please click here.

For stimulation with the Mi-sensor system, all the suggested placements represent the optimal positioning of this system. It is therefore recommended that you follow these instructions carefully.

If you do not want to use Mi- technology, all you need to do is to replace the special electrode cable of the Mi-sensor system with another standard electrode cable.

The stimulation position depends on the muscle group to be stimulated. The various suggested positions are clearly indicated in pictograms next to the pictures illustrating electrode placement.

For programmes that trigger significant contractions (tetanic contractions), isometric work is recommended, i.e., the extremities of the limbs should be fixed so that there is no significant movement. For example, when stimulating the quadriceps, the user should be in a seated position with the ankles fixed with straps to prevent extension of the knees.

Working in this way has a dual purpose: on the one hand, to ensure greater safety and, on the other, to limit shortening of the muscle during the contraction, with the risk of sharp cramps under stimulation. As the contraction is particularly strong at the calf when the foot is extended, make sure that you have a sufficiently large load on your shoulders (or using some other means) so that the contraction remains static.

With the exception of specific indications for a particular programme, dynamic work should not be done without resistance.

For the other types of programmes (for example, the programmes of the Vascular, Massage and Pain categories and the Active recovery programme), which do not involve powerful muscular contractions, position yourself as comfortably as possible.

The question of the scheduling of the stimulation sessions during the week only arises in situations where at least two training sessions are to be done in the same.

This means that the voluntary training is not done on muscle fibres which are already tired. This is particularly important for strength and explosive strength training.

However, in resistance training, it can be very useful to proceed in the reverse order. Before the voluntary training, by means of stimulation for resistance, a “specific pre-fatigue session” is carried out on the muscle fibres without general and cardio-vascular fatigue. In this way, the voluntary effort on the “prepared” fibres will push the glycolytic metabolism faster and further.

Progression of the levels.

In general, it is not advisable to go through the different levels quickly with the intention of reaching the highest level as fast as possible.  The different levels correspond to progress in training and you must leave the muscles time to adapt, and time for the overcompensation to be put in place.

The most frequent error is to change from level to level as stimulation occurs at increasingly higher stimulation energies. The number of fibres subjected to stimulation depends on the stimulation energy. The nature and amount of work that these fibres do depend on the programme and level. The aim is, first of all, to progress through the electrical stimulation energies and then through the levels. The more numerous the muscle fibres you stimulate, the more numerous will be the fibres that are going to progress. But the speed of progress of these fibres and their aptitude for operating at a higher rating depend on the programme and level used, the number of sessions per week and the length of these sessions, and also on intrinsic factors particular to each individual.

The simplest and most usual procedure is to raise the level in the programme selected when changing to a new stimulation cycle.

It is also possible to go up a level in the course of the same cycle. In this case, it is advisable not to do so before working a minimum of three weeks at the same level.

Do not change level during an auxiliary or maintenance application. Do not change level either during a short intensive or aggressive cycle of three to four weeks. On the other hand, following the classic approach, during a six-week cycle, after three weeks you can change to the level above. Similarly, in an intensive or aggressive cycle of six to eight weeks, you can go up a level after three to four weeks.

All the programmes involving significant contractions (tetanic contractions) of the stimulated muscles automatically start with a warming-up sequence. This is indicated on the screen by an animated rising convection symbol above the heater symbol.

After the stimulation work sequence, a relaxation sequence starts automatically. This is to allow improvement in the recovery of a muscle after its work under Compex and to limit muscular aches to some extent. Unless you want to go on immediately to voluntary training stages, it is recommended that you let the last sequence go ahead. It is also recommended, even if the stimulation seems to improve your muscular elasticity, that you do some stretching of the muscles that you have just worked with the Compex.